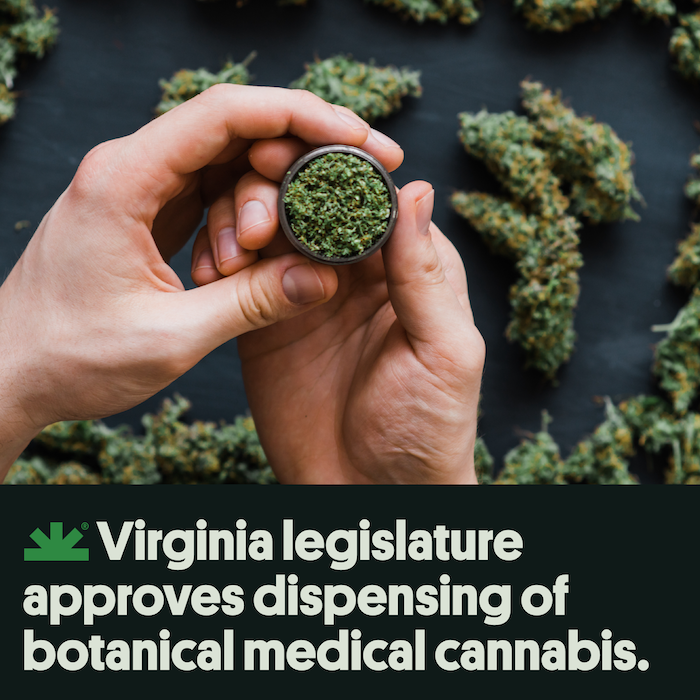 Virginia House of Delegates and Senate lawmakers have passed House Bill 2218 and Senate Bill 1333 amending the state’s medical cannabis program to allow for the production and dispensing of botanical cannabis. The bills await action from Governor Ralph Northam, who is expected to sign the measure into law.

Under the Commonwealth's existing medical cannabis law, licensed cultivators are required to process cannabis into extraction-based formulations, such as oils and tinctures. The new measure expands the pool of legal products to include those composed either of "cannabis oil or botanical cannabis."

NORML Development Director Jenn Michelle Pedini, who also serves as the Executive Director for Virginia NORML, praised the legislation. "Botanical cannabis remains the most popular formulation among consumers and among older consumers in particular. Limiting patients' options to extracted oral formulations is not in their best interests. Botanical cannabis contains more than 100 distinct cannabinoids, many of which act synergistically with one another, producing an effect many scientists believe is necessary in order for patients to achieve maximum therapeutic benefit."

Medical cannabis dispensaries began operating in Virginia in the fall of 2020. If the pending legislation is approved, dispensaries are anticipated to have botanical cannabis available for registered patients as early as September 2021.

Separate legislation seeking to legalize the possession of marijuana by adults 21 and older and license its retail sale continues to advance in state legislature. Governor Northam continues to offer his public support for the legislation, which is backed by 68 percent of Virginians.