This decriminalization forum was hosted by the Hampton Branch of the NAACP, and was held in Bethel AME Church in Hampton. It was a fitting place to gather people seeking sanctuary from the stigma of marijuana and those seeking safety for their communities. Although the event began at 7pm, guests began arriving as early as an hour in advance. WAVY10 covered the event, conducting interviews with several attendees and panelists. The community’s excitement for the topic was palpable. While nearly half the United States currently lives under laws allowing personal or medical access to marijuana, the subject still seems taboo to some in the Commonwealth. 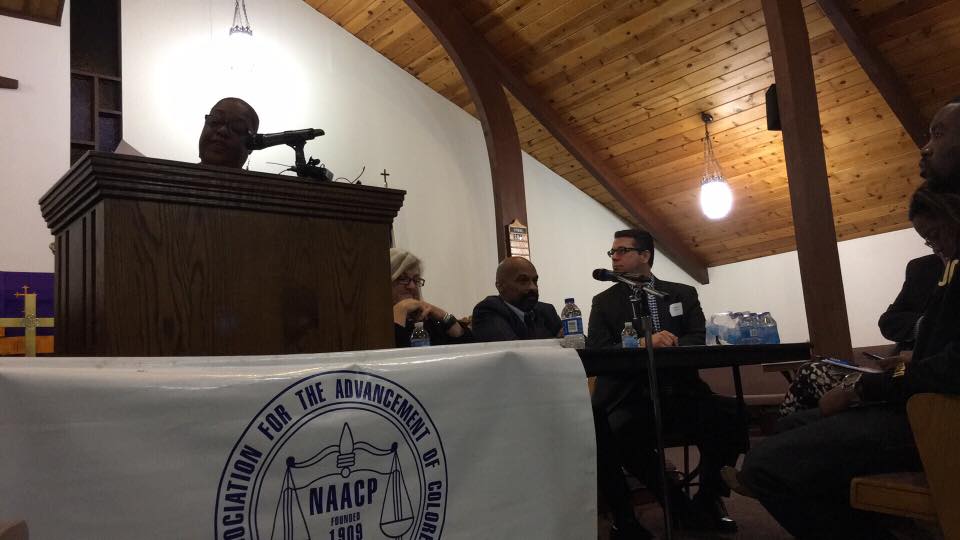 Forums like this are designed to push past the stigma with open communication and honest conversations, focusing on building safer communities by reducing criminalization of Virginians, particularly younger adults and people of color. The event was moderated by Barbara Hamm, a groundbreaking journalist who broke several racial and gender barriers in the newsroom. There were seven panelists with a variety of specialties and expertise:

Also in attendance were political candidates and representatives, Hampton’s mayor, members of the city council and school board, leaders from a variety of civic and community organizations, including Virginia NORML, Decriminalize Norfolk and Decriminalize Virginia Beach, and dozens of concerned citizens. The event started with a prayer over the speakers and the discussion, that it would be for the benefit “not of ourselves, but the community at large.”

First, each panelist discussed their expertise and offered their views on marijuana. The general consensus was that the criminalization of marijuana causes far too many collateral consequences, long lasting ripple effects that go well beyond any formal punishment imposed by the court. Throughout the evening, Christie Marra highlighted the housing problems and family law issues stemming from possession convictions, arrests, and even allegations, and Claire Guthrie Gastañaga discussed the disparity of marijuana convictions between racial groups and the impact on immigration. The strongest opponent to decriminalization was Barry Archie, who cited concerns of powerful potencies that are more dangerous for children. Anton Bell, the commonwealth attorney, stated he does not prosecute misdemeanor possession, as it is a waste of limited resources. Arresting officers are free to proceed to trial on the charges though.

After the panel’s opening statements, Barbara Hamm first posed a series of the questions before opening the floor to the audience. The questions ranged through a variety of issues, but some general themes quickly became apparent.

Travis Fain has been covering politics in the Commonwealth for the Daily Press for several years. While he did not state a position, being an apolitical player, he noted that marijuana progress in Virginia has been very slow, and noted committees in the House of Delegates as the identifiable chokehold.

Repeatedly, the “potency" of marijuana was cited as a concern by law enforcement. However, this argument holds very little weight. There will always be people who abuse substances. However, a responsible adult user of marijuana would simple consume a lesser quantity of higher potency marijuana, much like a responsible alcohol drinker would adjust their consumption for beer, wine, or hard liquor. Being intellectually honest, the potency marijuana has nothing to do with the current state of punitive prohibition imposed on otherwise law-abiding citizens.

Exposure to other drugs

Shooting smack. Sippin’ syrup. Smoking spice. All of these were mentioned, because these lethal narcotics are of actual to the local community. A member of the school board shared the tragic loss of his brother related to spice, and lamented people’s fear of the criminal consequences of consuming marijuana leading them to  lethal, synthetic alternatives.

What about the children?

In the opening prayer, the community at large was invoked as the impetus for the discussion of decriminalization held that evening. A common concern from the community was for the children. Unfortunately, decriminalization does very little to change the current illegal marijuana market unscrupulously selling products to underage minors. That can only be done through regulation of adult use, which would impose age restrictions and ID requirements. Fortunately, decriminalizing simple possession for personal adult-use keeps families out of the criminal justice system by allowing infractions to be treated as civil infractions. And most importantly, decriminalization redirects law enforcement resources towards felonies and violent crimes, keeping neighborhoods safer and improving community relations.

Although there were a handful concerned by the thought of decriminalization, mostly due to confusion with legalization, the overwhelming majority of the audience was in favor of reform. Many were unaware that without the allowance for ballot initiatives - used by voters successfully in other parts of the country - Virginians are left with one path: presenting facts and informed arguments to the elected leaders of our various districts, municipalities, and state-wide offices to change any perception of marijuana policy reform as a frivolous or fringe issue to that of an important public policy issue that must be quickly addressed. Luckily, Virginia NORML is leading the fight and with your continued help, we will succeed.

>>Donate to assist Virginia NORML’s effort to bring change at all levels of Virginia government.

>>Join today for more information and involvement in the marijuana reform effort in Virginia.

>>Take action today by urging your representatives to join the Congressional Cannabis Caucus and to support pending federal legislation.