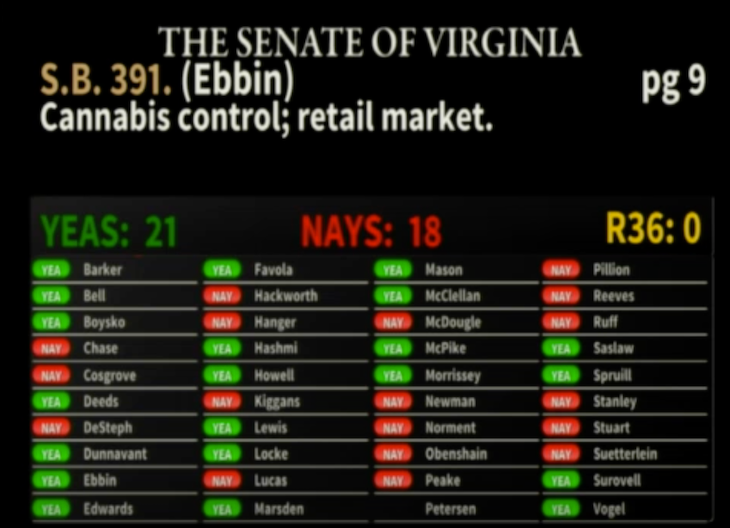 Today, the Virginia Senate approved Senate Bill 391 in a historic bipartisan vote to regulate the retail sale of cannabis to adults 21 and older. Sales could begin as early as September 15, 2022 at the state’s existing medical dispensaries. The bill also provides for the licensing of additional cultivation, manufacturing, retail, and wholesale businesses via the recently established Cannabis Control Authority.

Pedini cautioned, however, that “this legislation still faces an uphill battle in the Republican-led House of Delegates. Multiple cannabis bills filed in the House failed to receive a single hearing. It is ultimately incumbent upon Speaker Gilbert to ensure SB 391 is heard in the chamber.”

In November, Republicans won statewide races for Governor, Lieutenant Governor, and Attorney General, in addition to taking control of the House of Delegates. In 2021, lawmakers in both chambers approved adult-use legalizationwithout a single Republican vote. The legislation was signed into law in April by outgoing Democratic Gov. Ralph Northam. That legislation contained a reenactment clause requiring legislators to hold an additional vote on matters pertaining to the regulation of the adult-use market in the 2022 General Assembly. The personal possession and home cultivation of small quantities of cannabis is already permitted in Virginia under the 2021 law.

Earlier this year, Republican Gov. Glenn Youngkin acknowledged he wouldn’t look to overturn legalization, but that he thinks “there is a lot of work to do.” Speaker of the House Todd Gilbert (R) has publicly criticized the state’s adult-use law and has promised to “fix” it.

“The overriding top-tier concern is that we have to have a regulatory structure in place for retail sales that does not encourage the black market,” said Garren Shipley, a spokesperson for Speaker Gilbert.

Additional bills to improve the medical cannabis program and eliminate patient registration succeeded in both the Senate and House of Delegates this week. Legislation related to record sealing for felony marijuana convictions, prohibiting dissemination of prior misdemeanor marijuana records, and parole for those serving sentences for marijuana also succeeded in the Senate. Wednesday, all legislation approved in its chamber of origin will cross over to the opposite chamber for debate.